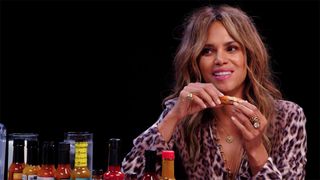 Halle Berry joins Sean Evans at the Hot Ones table for the latest episode of the interview series, following last week’s installment with the Jonas Brothers. While taking on the spicy wings challenge, the Oscar-winning actress dishes on Hollywood filming secrets, the evolution of movie making, her web addiction, and more.

Berry begins the segment by proclaiming that she prefers spicy foods. With John Wick 3 now in theaters, the 52-year-old actress then delves into the intricacies of shooting fight scenes, while disclosing that she broke three ribs during her training for the movie. She also reveals that since wrapping production on the film she has trained her dogs to attack.

Elsewhere on Hot Ones Halle discusses her favorite name-drops in hip-hop — specifically touching on Kanye West and Nas — the way people consume entertainment, and being obsessed with the internet very early on.

To watch Halle Berry clean each wing during the Hot Ones challenge, press play above.

Here’s @halleberry going full on Clean Wing Club on an all new Hot Ones https://t.co/0fEn5V0BiU pic.twitter.com/SMIQOzMCh5