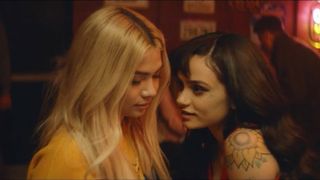 Ever since Hayley Kiyoko burst on to the music scene as a solo artist, she’s been on a mission to empower the LGBT community by pushing authentic queer narratives front and center. Today, the emerging pop singer has released a music video for her Kehlani-assisted single “What I Need”. In the self-directed visual, the singers play a spicy pair of runaways that ditch a toxic environment and embark on a road trip leading them to pure, queer bliss with a few plot twists in the mix. Kehlani tweeted about the positive experience she had collaborating with Kiyoko:

just so u know…. this my favorite video i’ve ever been apart of. Hayley is a genius, an incredible actress and one of the most diligent and hard working directors i’ve ever had the pleasure of working with. who’s ready? #WHATINEED

Both artists identify as queer and recently vocalized their disapproval of Rita Ora for catering to the male gaze on her latest single “Girls” featuring Cardi B, Charli XCX, and Bebe Rexhe. Kehlani has since deleted her tweets, but she criticized the song’s “harmful lyrics”. Ora immediately issued a public apology in response to the backlash and sort of came out as bisexual.

“What I Need” is featured on Kiyoko’s debut full-length album Expectations. Prior to that, she was a member of a girl group called The Stunners with Tinashe. Kiyoko previously starred in XOXO, Jem and the Holograms and Lemonade Mouth, and has a part in the upcoming film Becks. Stream the entire project below.

In other news, listen to Charli XCX’s newly released single “5 In The Morning” right now.