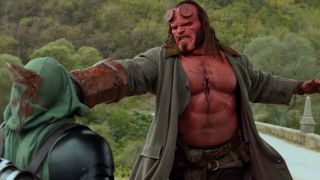 The latest Red Band trailer for Hellboy has arrived — and it promises a lot of gore. Starring Stranger Things‘ David Harbour and directed by Game of Thrones and The Descent director Neil Marshall, the reboot of the franchise takes a slightly darker and less PG look at the Hellboy character than Guillermo del Toro’s version.

The trailer gives us a glimpse into the movies’ plot, where Hellboy partners with the Bureau for Paranormal Research and Defense to fight Nimue the Blood Queen, played by Milla Jovovich. We also get a look at Ian McShane as Trevor Bruttenholm, Sasha Lane as Alice Monaghan, and Daniel Dae Kim as Ben Daimio.

In case you missed it, watch the previous trailer for Hellboy below. The movie hits theaters April 12.