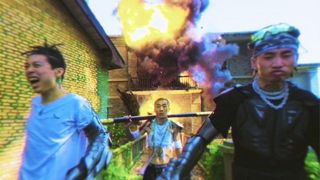 Fresh off the release of their sophomore album, Five Stars, Chinese rap group Higher Brothers just dropped the official video for “Top,” a standout single from the aforementioned project that features Soulja Boy.

The mamesjao-directed visual delivers a surreal experience and showcases the quartet of rappers transported into a video game world simulation where they are equipped with futuristic weapons and sent on a mission to fight their way to the top.

Higher Brothers are seen performing a variety of highflying stunts throughout the video which they executed themselves, and towards the end of the clip, a cameo from “Big Draco” a.k.a. Soulja Boy appears. The video concludes with an explosion, completing the rappers’ mission.

Enjoy the clip above and you can listen more from the highly-rated Five Stars album via Spotify below.

Higher Brothers is also embarking on a worldwide tour that kicks off in their home country on March 23 and concludes in the Netherlands on September 13. Scroll through for the full list of dates and locations.