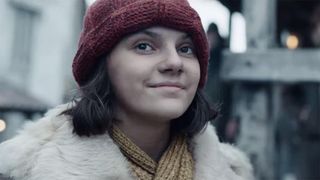 Still with no confirmed release date in sight, HBO continues to tease its next big fantasy series following the conclusion of Game of Thrones. His Dark Materials is based on Philip Pullman’s celebrated novel series of the same name, centering around a young orphan by the name of Lyra.

The latest trailer for the anticipated HBO show spotlights the lead character, Lyra Belacqua, as played by Dafne Keen. While searching for her missing friend, Lyra uncovers a dangerous secret involving numerous kidnapped children. Additionally, it’s worthy of note that the series is set in an alternative world where humans have animal companions referred to as dæmons.

Ruth Wilson, James McAvoy, Clarke Peters, and Lin-Manuel Miranda also star in His Dark Materials, which is expected to premiere on HBO in 2019, although a specific release date has yet to be announced.

HBO Shares First Trailer for Its Next Fantasy Series ‘His Dark Materials’
MoviessponsoredMay 17, 2019