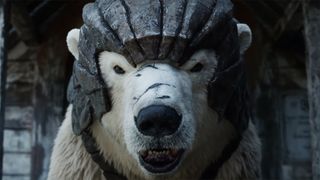 HBO is hoping to fill the void left by the departure of Game of Thrones with a new fantasy series titled His Dark Materials. After giving us an initial look at the anticipated show back in May, this week the network shares the first full-length trailer for the program based on Philip Pullman’s award-winning trilogy of the same name.

His Dark Materials stars Dafne Keen (Logan) as protagonist Lyra, a seemingly ordinary young woman from another world. While searching for her kidnapped friend, she stumbles upon an organization responsible for the disappearance of children. Lyra’s quest takes her through multiple worlds, including our own, as she is eventually joined by a courageous boy named Will on a journey that sees them uncover dangerous secret and extraordinary beings, including an armored bear.

James McAvoy, Ruth Wilson, and Lin-Manuel Miranda also star in His Dark Materials, which comes to HBO this fall.