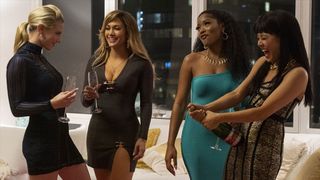 The reviews are in and critics are unanimously overjoyed with Hustlers, starring Jennifer Lopez, Cardi B, Lizzo, Constance Wu, Keke Palmer, and Lili Reinhart. The sequence in which Lopez performs to Fiona Apple’s “Criminal” is enough to immediately win over ’90s kids, but critics across generational lines are sharing their praise for the film’s authentic, ambitious and impeccably plotted depiction of the scam of the summer.

While it’s not the first time strippers have been portrayed on the big screen, critics are suggesting it could be one of the best. Beyond the incredible (and true) story itself, the heist film is racking up rave reviews thanks in large part to its unbelievable ensemble cast. Director Lorene Scafaria has also received widespread kudos for her nuanced, raucous and visually compelling crime thriller.

First of all… J Lo

#HUSTLERS was a JOY. Jennifer Lopez is a BEAST. Cardi is a natural talent. Seeing a movie like this with a woman (Lorene Scafaria) behind the camera gave it such a different energy than you traditionally get in a genre men like Soderbergh and Scorsese have made their own.

“Lopez gives her most electrifying screen performance since “Out of Sight,” slipping the movie into her nonexistent pocket from the moment she strides out onto a neon-lighted stage in a rhinestone bodysuit.”

“It seems Jennifer has finally found herself in the running for an Oscar nomination after three decades in Hollywood.”

“Wu and Lopez, especially, deserve accolades for the career-best work they put in here… You’ve never seen the movie star exude such gritty, carnal energy. It’s as discomfiting as it is mesmerizing.”

“Hustlers” is the first contemporary film — hell, maybe even the only film — about strippers that comes to its audience with a distinctly female gaze, a movie about women (who happen to be exotic dancers) that’s for other women.

“Scafaria excels at immersing the audience in the world of sex work in clubs, quietly disabusing us scene by scene of any stereotypes about who these women are. Part workplace dramedy, part revenge fantasy, the film weaves together a series of satisfying, organic-feeling turns.”

“With “Hustlers” being ostensibly the “Avengers” and “Star Wars” of stripper movies, Scafaria juggles a large cast well and still keeps the momentum humming along.”

The hype is real

Review early next week, but #Hustlers is very good. A thoughtful, nuanced and character-driven dramedy with terrific work from Constance Wu and Jennifer Lopez. The hype is real, and it's easily one of the best films thus far from STX. pic.twitter.com/SMTlYeZXDy

“Flashy, fleshy and all-around impossible to ignore, “Hustlers” amounts to nothing less than a cultural moment.”

“There are so many immediate pleasures and vicarious thrills to be had in Hustlers, a giddy, gaudy blast of a movie, that it’s easy to forget the intricate framework which houses it.”

“With an all-star cast led by a fierce Jennifer Lopez, Hustlers is a glossy crowdpleaser that shatters the male gaze. But in avoiding titillation, Hustlers ends up taking some of the teeth out of a sharp, sensuous, and satisfying true-life scam story.”

‘It Chapter Two’ is “Pointlessly Long,” According to Critics
MoviessponsoredSeptember 4, 2019