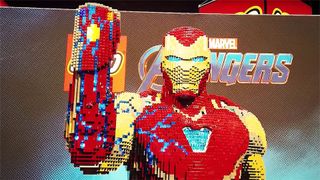 If you’re yet to find the ultimate tribute to fallen Avenger Tony Stark, then LEGO has you covered. The company has immortalized the late Iron Man with his own life-size statue built from over 35,000 individual bricks. It also shared a behind-the-scenes video that takes you through the building process. Watch above.

The statue stands at 6.5 feet tall, weighs 188 pounds, features 35,119 bricks in total, and took 255 hours to construct. LEGO’s lead model designer Greg Omartian and senior model builder Jeff Rushby were the two doing the majority of the building and they explain each step in the three-minute-long clip up top.

The LEGO Marvel model was first on display at this year’s San Diego Comic Con and even boasts LED lights that replicate the Nano Gauntlet’s power. This, they explain, was the hardest part to get right. “The most challenging part of designing Iron Man was probably incorporating the lights into the eyes, the Arc Reactor, and hand because there’s not much room in the model to add electronics so you have to be very careful about the way you build the outer wall of the model.”