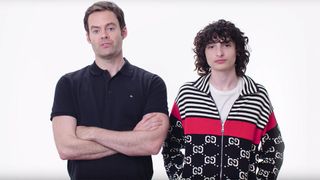 The members of the original “Losers Club” stopped into Vanity Fair to bring you all the information needed to prepare for It Chapter Two. In a rare treat, the OG losers and their grown-up counterparts pooled their knowledge to recap all the key details to get viewers up to speed.

It Chapter Two is out now. To see what critics are saying about the horror movie, follow here.

‘It Chapter Two’ is “Pointlessly Long,” According to Critics
MoviessponsoredSeptember 4, 2019

The First Reviews for ‘It Chapter Two’ Are In & They’re Divisive
MoviessponsoredAugust 21, 2019

‘It’ Is Returning to Theaters With Post-Credits Footage From ‘It Chapter Two’
MoviessponsoredJuly 31, 2019

‘It Chapter Two’ Will Have an Insanely Long Runtime
MoviessponsoredJuly 29, 2019
What To Read Next
Load More
Search Results
Load More