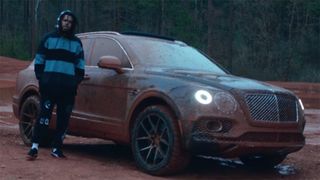 This past Friday, J. Cole announced that he would be dropping the video for his latest single, “Middle Child,” today, February 25. The day has come, as Cole delivers the Mez-directed aesthetic just like he promised.

J. Cole stars in his “Middle Child” video, pictured taking a Bentley off road, chilling in a cabin, and riding in a shopping cart throughout a grocery store. To close out the visual, Cole then touches on the white consumption of black culture. Press play above to check it out.

J. Cole released “Middle Child” back in January but it remains to be seen if the song will appear on the upcoming Dreamville Records compilation, Revenge of The Dreamers III.