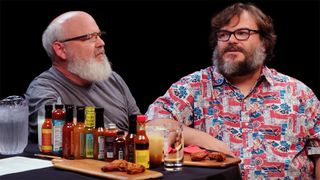 Jack Black and Kyle Gass, collectively known as Tenacious D, have been rocking the stage for more than two decades. And while performing for sold-out venues is certainly nothing new, their most recent appearance is an animal of an entirely different breed. Here, we see the comedic rock tandem taking on Hot Ones‘ spicy wings challenge.

While putting their taste buds to the test, Black and Gass dish on memorable shows, Jack’s infamous Dorito Burrito, and their new six-part animated YouTube series, Tenacious D in Post-Apocalypto. In addition, Jack Black praises Kanye West, while simultaneously comparing himself to Donald Trump due to Ye’s shoutout.

Press play above to see Tenacious D on Hot Ones.

LEGO Is Bringing Back One of Its Best Pirate Sets Ever
DesignsponsoredMarch 24, 2020

Gucci’s Stripped Back SS20 Show Was One of Its Best in Years
StylesponsoredSeptember 23, 2019

Megan Thee Stallion Is Getting Us Ready for Back to School Season With Hot Girl Semester
MusicsponsoredSeptember 2, 2019

Richardson Brings Back the Classics and Introduces New Ones For FW19
StylesponsoredSeptember 18, 2019

Alife Brings Back One of Its Original Sneakers
SneakerssponsoredOctober 22, 2019
Follow
Highsnobiety Music
What To Read Next
Load More
Search Results
Load More