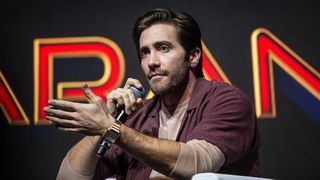 After Jake Gyllenhaal announced he would be playing Mysterio in the upcoming Spider-Man: Far From Home movie, we have received some more information about the actor’s character. Previously thought to be the villain of the movie, Mysterio will actually be a good gut.

At least that’s according to Gyllenhaal and fellow cast member Jacob Batalon. The two revealed the information during a panel discussion at Brazil’s Comic-Con CCXP.

Batalon confirmed that the movie’s villains are the “Elementals” and that Mysterio and Spider-Man will be working together. “The main focus is for him not to be Spider-Man per se, but he gets dragged into it. But you know he reluctantly saves the world again with Mysterio. Mysterio’s a good guy in this, they’re both teaming up to kill the game, to defeat these Elemental monsters.”

Gyllenhaal added that Nick Fury is the one who recruits Mysterio’s to help save the world: “Well there are these threats to the world, the Elemental creatures, and Mysterio is someone who knows abut them and who wants to make sure that the world is safe from them, and Nick Fury asks him to come on and help because he’s the only one who really understands them in a way.

You can watch the full panel discussion in the video above.

Let us know what you think and whether you’re excited to watch the newest Spider-Man movie.

In other movie news, Nicki Minaj was cast as a voice actor in ‘Angry Birds Movie 2.’ Find out more here.

‘Spider-Man: Far From Home’ Is Returning to Theaters With a New Action Scene
MoviessponsoredAugust 20, 2019

What the ‘Spider-Man: Far From Home’ Post-Credits Scenes Mean for the MCU (Spoilers)
MoviessponsoredJune 21, 2019