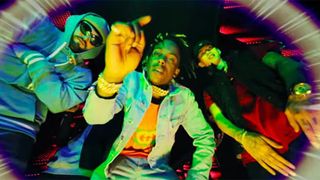 Jay Park “FSU” ft. @gashi @richthekid prod by @groovypark @hwimmm out now MV directed by @jinooyamakes thank u to everybody that was apart of this ??? #aomg #h1ghrmusic #rocnation #FSU #SOJU

Directed by Jinooya Makes, the official music video depicts a fast-paced, colorful scene that changes in sequences while Jay Park, Gashi and Rich The Kid “f*ck sh*t up” with confident lyrics over the head-bopping beat produced by South Korean composing and producing duo Groovy Room.

Overall, as the title suggests, Jay Park calls out anyone who underestimates him and says, “With the song and video I wanted to make a statement. I’m here and I’m here to stay.” The Korean-American signed a record deal with Roc Nation last year, and this single is the second track from his highly-anticipated EP, Ask ‘Bout Me, set to drop on Friday, July 20.

For more from Jay Park, check out the “Run It” music video with Nike Korea.

8 Insanely Expensive Accessories to Make You a Better Chef
SelectssponsoredFebruary 7, 2020