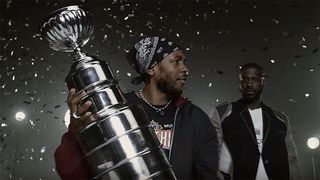 Last week Jay Rock announced his new album, Redemption. In building anticipation for the LP, the TDE rapper is now back with the official music video for project track, “Win.”

Directed by Dave Meyers and Dave Free (of The Little Homies), the entertaining aesthetic stars the song’s collaborator, Kendrick Lamar, alongside Jay Rock, as the overall theme of winning is prevalent throughout.

Jay Rock’s Redemption acts as a followup to 2015’s 90059, as it is due out June 15. Be sure to check back with us for more on the impending compilation, and don’t forget, you can see Jay Rock, K. Dot, and the rest of the TDE crew on the ‘Championship’ tour this June.

How 10 of the Biggest Hip-Hop Stars Got Their Rap Names
MusicsponsoredJune 4, 2015
Follow
Highsnobiety Music
What To Read Next
Load More
Search Results
Load More