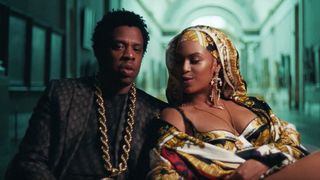 Jay-Z and Beyoncé dropped a surprise album titled Everything is Love under their collaborative The Carters project last night — and it’s fair to say it has already taken social media by storm.

The nine-track album is currently streaming in full via TIDAL (check out the stream below), but if you’re not a subscriber to the service you can watch the official video for lead track “APES**T” above.

Once you’ve had a listen to the album, here are the best takes doing the rounds on social media.

Beyoncè, out there ended all the rappers' careers rapping her soul out. #EverythingIsLove pic.twitter.com/uVKS7zVBc0

Jay Z tormenting Nas until the day he dies #EverythingIsLove

Me creating my 10th email account to get this Tidal free trial #EverythingIsLove #Beyonce pic.twitter.com/KAp3wcHTF9

Me signing up for Tidal a 4th time for #EverythingIsLove pic.twitter.com/qNTaN8tbqk

Beyoncé has a new fan

Spare a thought for Kim

Father’s Day Weekend & Jay-Z decides to SON Kanye & NAS? Jay you just couldn’t let them have the weekend, could ya #TheCarters pic.twitter.com/D0HmVscvUv

In other news, listen to the new Lil Peep rrack “Sex With My Ex”