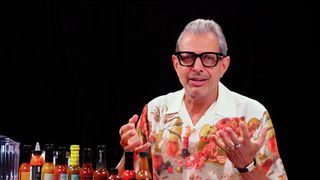 Hot Ones is closing out season six with a bang, welcoming iconic actor Jeff Goldblum to the table. And while he’s not supposed to have spicy food — per his voice doctor’s request — he gives it a go to see just how many sauces he can get through.

During his time on-set, Goldblum dishes on Pittsburg cuisine, jazz club slang, and Jurassic Park folklore. He also tries his hand at scat signing, informs that he likes being called daddy — and zaddy for that matter — and details the time he met Quavo.

To see the incomparably animated Goldblum take on the spicy wings challenge, simply press play above.

In other entertainment news, Quentin Tarantino has finally chosen an actor to play Charles Manson in ‘Once Upon a Time in Hollywood.’ Head here to find out who it is.