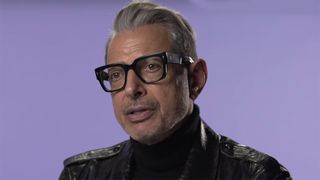 Jeff Goldblum is the first guest to appear in Genius’ new web series, Between the Lines, where celebrities react to themselves being name-dropped in hip-hop lyrics. The eight-minute video finds the respected actor and jazz musician reading lyrics from numerous hip-hop songs, then responding to the references and even decoding them.

Goldblum has been name-dropped and his work mentioned on a variety of tracks from the likes of Childish Gambino, Eminem, Dr. Dre, and The Notorious B.I.G. A star in Jurassic Park, that film alone has been referenced numerous types in hip-hop, while we also find mentions of The Fly and Law & Order: Criminal Intent.

In between reading the lyrics, Goldblum takes the time to recite Shakespeare and even drag his own hair from his days on Law & Order. Press play above to check it out.

‘I Shouldn’t Be Telling You This,’ But Jeff Goldblum Just Announced a New Album
MusicsponsoredSeptember 14, 2019
Follow
Highsnobiety Music
What To Read Next
Load More
Search Results
Load More