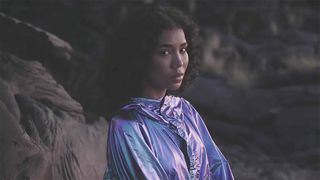 Although Jhené Aiko and Big Sean haven’t publicly addressed their breakup, it seems as though Aiko is channelling some anger-fueled heartbreak vibes in new freestyle “Triggered.”

“Maybe I’m over reacting, maybe I don’t know what happened / You know all my bad habits, you know it’s hard for me to control that shit, man / ‘Cause when I get mad I get big mad, should’ve never did that.”

Watch and listen to Aiko express herself perfectly in the desert-set video above.

As the track dropped, Aiko took to Twitter to clarify to fans that this was not a diss song, rather a “moment of exaggerated expression when [she] was feeling lost and weak.”

"triggered" was a moment. a moment that for me has passed. it is new to you because ur just now hearing it, but for me… it's something i moved on from the moment i expressed it.

triggered is NOT a diss song. it is a moment of talking shit out of frustration and passion. it's was a moment of exaggerated expression when I was feeling lost and weak. no one is to be blamed or bashed for how I was feeling in that moment. I am in control of my feelings.

this is how I paint. this is me yelling and throwing paint at a canvas… then going out into the world feeling less tension, more open… more loving. going to bed feeling less stressed, more optimistic.

Jhené Aiko Taps Her Ex Big Sean for Breakup Track “None of Your Concern”
MusicsponsoredNovember 15, 2019

Everything We Know About Jhené Aiko’s New Album ‘Chilombo’
MusicsponsoredJanuary 29, 2020