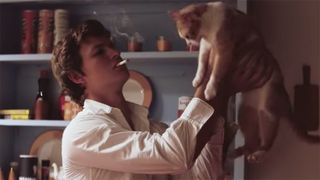 Burgeoning Dreamville rapper J.I.D calls on his pal Ansel Elgort to star in the video for his DiCaprio 2 standout, “Off Da Zoinkys.” The cinematic clip is a nod to Robert Altman’s 1973 film, The Long Goodbye.

In the video we see Ansel dancing around his apartment while smoking a cigarette and feeding his cat. Elgort portrays Philip Marlowe from the aforementioned The Long Goodbye, which was originally played by Elliott Gould.

The Long Goodbye (1973), directed by Robert Altman. Ansel played Elliott Gould’s character, Philip Marlowe, a private detective. We added our own twist to it, tell me what u think, even if u don’t fully get it lol let’s talk about it

J.I.D, who also makes a cameo in his own video, dropped DiCaprio 2, his second studio album, in November of last year. The project features the likes of A$AP Ferg, J. Cole, 6LACK and Joey Bada$$, among others.