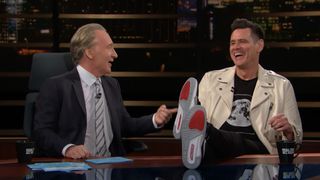 Starting at the (13:50) mark, Jim Carrey made it clear that Canada’s medical care system is in great shape, despite the inaccurate descriptions of the Canadian health-care system.

Earlier in the segment, Jim Carrey showcased his support for Nike’s controversial “Just Do It” ad campaign starring Colin Kaepernick by flaunting an Air Jordan Legacy 312 “Black Cement,” amidst those who are against the Swoosh by burning their Nike sneakers.

Jim Carrey also discussed the state of American society, as he explained that he’s worried for this generation of kids. “Growing up right now… who are learning to lie, that lying is OK, that it’s fake news, that you’re supposed to hate half the country,” he said.

He then preached a message of unity towards others. “If anything, we’ve got to get back to a place where we realize that a vote is not who you are, and because you voted Republican you’re not stupid, you’re not different, you’re not worthless. I can break bread with anybody who voted for Trump, we could find some common ground to love each other. Just stop doing stupid s**t.”

Enjoy the full segment above and don’t forget to share your thoughts in the comments below.

Now, in case you missed it, Jim Carrey shared his anti-Trump paintings on Twitter and they’re savage.

Fans Think Jim Carrey Is the Only Thing That Can Save ‘Sonic the Hedgehog’
MoviessponsoredApril 30, 2019