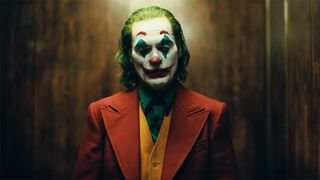 Put on a happy face. #JokerMovie – in theaters October 4. pic.twitter.com/TxF3Jqxjjr

The trailer for Joker gives us a look at how Arthur Fleck — the man who will eventually become the Joker — transitions from happy-go-lucky clown to cynical monster. “I used to think my life was a tragedy,” Fleck says, “But now I realize it’s a comedy.”

As Fleck witnesses the world around him becoming more sinister than ever, he begins to take a sadistic turn of his own, ultiatmely transforming into the infamous Batman villain.

Some insist that Jared Leto’s portrayal of the Joker in Suicide Squad left much to be desired. This largely puts responsibility on Phoenix to turn the ship for the iconic character. Expectations will be high nonetheless, thanks to legendary performances from the likes of Jack Nicholson in 1989’s Batman and Heath Ledger in 2008’s The Dark Knight.

Expect to see and hear more surrounding Joaquin Phoenix and Joker leading up to the movie’s much-anticipated October 4 release date. Until then, we’ve compiled the best reactions to the first Joker trailer. See them below.

This moment and this moment alone, Joaquin Phoenix has sold me on his iteration of the Joker. #JokerMovie pic.twitter.com/sPiTEr9M9T

OH MY GOD just saw the trailer for Joker and it is quite clearly one of my most anticipated films to see ever!!! THAT IS A BIT OF ME wowowowowow

Watched the trailer for the #Joker movie and it looks killer. Ever since hearing that Joaquin Phoenix was on board I was pretty interested.
It's less a superhero movie and more of a grounded in reality type of flick, gave me some Henry: Portrait of a Serial Killer vibes pic.twitter.com/JL0BkBSvYs

The Joker trailer shows us a portrayal of the character that is more frightening to me than all of the other interpretations brought to screen before it.

And it's this: You feel bad for him.

Could the Joker be the character that gets two actors an Oscar?

Anyone who doesn't realize that the character of #Joker is steeped in tragedy and darkness and thinks this film isnt "light" or "fun" enough has allowed themselves to be consumed by the current culture of superhero films and are essentially living in a box pic.twitter.com/WiBtQ5ynbg

Me, on my way to Joaquin Phoenix's house after watching the Joker trailer pic.twitter.com/Zht1Wp7LDG

Joaquin Phoenix as Joker is one the GREATEST things yet to happen to Hollywoodpic.twitter.com/JQhJykWLZf

"That most rare and tragic of nature's mistakes! I give you: the average man!"
Watched the #Joker trailer at midnight and if I didn't have nightmares about him when I was a child, I'm definitely gonna have it now. pic.twitter.com/mhLXoNeLbT

The makeup of Phoenix joker is better than Ledger joker 🤡#JokerMovie pic.twitter.com/9UaWWOPK0S

this part of the new joker trailer got me pic.twitter.com/cADI5xkysp

joaquin phoenix is gonna fucking be soooooooo good as the joker

Heath Ledger won a posthumous Oscar for playing the Joker in Christopher Nolan's #TheDarkKnight. Now that you have seen the #Joker teaser trailer, do you think Joaquin Phoenix has a chance to become the second actor to win an Oscar for playing the clown prince of crime? https://t.co/aI1slyC4Hg

Anyone who doesn't realize that the character of Joker is steeped in tragedy and darkness and thinks this film isnt "light" or "fun" enough has allowed themselves to be consumed by the current culture of superhero films and are essentially living in a box pic.twitter.com/RmrzQvvo3f

Arthur before turning into Joker was writing his material for his stand up and the last part got me.
“The worst part of having a mental illness is people expect you to behave as if you don’t… (smile(?))” pic.twitter.com/vBFM9kNskg

#Joker looks absolutely stunning. I love how the trailer isn’t showing Joaquin Phoenix wax poetic about chaos, or showing him on a murderous rampage. It’s showing his descent into madness, as he gradually loses his grip on reality. This could be something special. pic.twitter.com/DbpkDn81oI

Calling it now. Joker will be the movie to earn Joaquin Phoenix his long deserved Oscar. This man transformed his mind and body to depict what it looks like when our hopes and dreams die. This may be the first CBM to win best picture#Joker #JokerMovie pic.twitter.com/t6oXMNALvA

People really out here using Heath Ledger’s name to come at Joaquin Phoenix’s Joker. The movie isn’t even out yet. pic.twitter.com/QA4KewdXjA

Everyone else: THE JOKER MOVIE LOOKS AMAZING OMG

This is going to be beautifully fucked up i can't wait #joker pic.twitter.com/3epiRT9V2C

A film based on the JOKER who's a psychotic VILLIAN is too dark???? Y'all are fucking brainwashed. https://t.co/EIxpIpRL0b

Joaquin Phoenix is going to kill it as the Joker! He has a unique take on the character. #Joker #ToddPhillips pic.twitter.com/Dzbaj8dQsy

i wont have people saying Joaquin Phoenix is a better Joker than Heath Ledger. they can both be the best pic.twitter.com/ScCRhVVDL7

I'm not sure I'm sold on the new Joker movie, but the makeup is *amazing* pic.twitter.com/XICk9Yqbdj

Me when I see people hating the new Joker trailer for being too dark and depressing pic.twitter.com/l7TQjMuvTR

Each of these Jokers not only looked different but had a different personality. That's the beauty of comic book characters. You can have many versions of them. There's literally no reason to bring up Heath Ledger's Joker everytime they cast a new one. #KillingJoke pic.twitter.com/hSRK9ZFSWg

No need to make Ledger comparisons… Joaquin Phoenix is in his own lane. This looks fantastic pic.twitter.com/jKUKFmPwtq

joaquin phoenix as the joker, i can tell from now he's getting that oscar, so let's hold my beer and enjoy the trip pic.twitter.com/aHpBty7U4q

#Joker looks like exactly what I wanted it to be.

The visual style is dark and gritty, the twisted humour lends itself so well to this character.

Joaquin just disappears into this role, I could not be more excited! pic.twitter.com/PXQnye2m72

The Most Hilarious Memes From the 2020 Oscars
MoviessponsoredFebruary 10, 2020