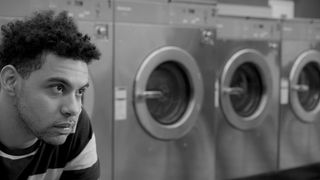 Sometime between 2013 and right now, you’ve probably come across the music of Jon Waltz. The Memphis-bred artist (and University of Memphis graduate) has already worked with the likes of BROCKHAMPTON‘s Matt Champion and Skizzy Mars, and even gained a Jaden Smith co-sign along the way. This week, he’s set to unleash his long-awaited Monochrome mixtape on June 26.

Ahead of the big drop, we’re premiering the music video for “Luna.” Waltz describes the track as a “highlight reel of all my worst nightmares compiled into one song.” He adds, “I was trying to make it feel like a reflection of those vulnerable moments where sometimes you think you didn’t do enough to get to where you need to be in life.”

The accompanying visual takes place in a laundromat and veers more into how the repeating cycle stems from a resistance to change, revealing “an endless loop of me being somewhere I don’t want to be.” Waltz’s music often touches on the orbiting that in-between state within spaces. In addition to breaking down cycles, Monochrome will also scratch the surface of “styrofoam houses, low balance alerts, automatic money guns, anime, and interstellar side-eyes.” After you watch the Nik Arthur-directed video, scroll down for our short interview to learn more about Waltz.

You’ve released a handful of singles over the past four years. Why has it taken so long for a full project to materialize?

In all honesty I just didn’t know if I wanted to make music, and on top of that I didn’t know if I wanted to put myself out there because it takes a lot of nerve to go all in. I tried a bunch of different styles over the years and the joy of creating slowly disappeared, but I’ve rediscovered what made me passionate in the first place, back when we were flipping King Krule beats to make rap songs in high school, just by caring less about all the distractions that don’t matter at the end of the day.

What has been going on in your life all this time?

I was in college. Just finished a few months ago. I remember getting no sleep the nights after shows and messing up exams the next day. It was a lot harder than I imagined to juggle music and school, but I had to see it through. I committed myself to getting a degree, now I can commit myself to this.

How would you describe the aesthetic of your music at this point in time?

Blue Grass (not bluegrass) with hi-hats.

How has Memphis shaped or influenced your work?

I’d say Memphis has heavily influenced the lyrics, with lines and flows that call back to Three 6, but less the sounds themselves. Sonically I take cues from lots of soul and blues artists of past generations. I listened to Aretha Franklin a lot during Monochrome sessions. She’s my dad’s favorite.

What is the story behind your forthcoming mixtape, Monochrome? Is there a specific theme in mind? Where does the title come from?

It’s all been inspired by trying to leave my hometown and coming back again, feeling stuck between being appreciated and being trapped within the bounds of the place I grew up. Monochrome comes from this weird, unsettling feeling I get watching black and white movies. When everything is the same color, when everything is mundane, how dreary that can be.

Can you talk me through the creative process that went into making it?

We made this in a bunch of different bedrooms in a bunch of different cities with a lot of Dropbox links. I wanted something that departs from the norms of Memphis music and culture but also highlights my southern heritage and my experiences as a black kid who grew up in a lot of different communities. Shout out Nik Arthur for all the artwork. Shoutout Eric Lynch and Colin Moriarty for doing the bulk of the production on the project and helping conceptualize the ideas.

How are you feeling about the long-awaited release of this mixtape?

Pretty good. This helped me figure out what I want to say and who I want to be moving forward and that’s a very good feeling.

What type of impression are you hoping to leave as an artist with your music?

I just want anybody whose existence feels like a contradiction at times to relate.

I got nothing boss. Monochrome out June 26th. Oh, and Sprite… If anyone at Sprite is reading this, let’s talk.

Jon Bernthal of ‘The Punisher’ Is the Villain in ‘Tom Clancy’s Ghost Recon Breakpoint’
LifestylesponsoredMay 10, 2019

Jon Favreau Explains Why Everyone Is Still So Obsessed With Baby Yoda
MoviessponsoredDecember 11, 2019