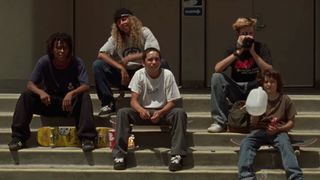 Fresh from his own holiday, Jonah Hill shares the official trailer for his directorial debut, Mid90s. The A24 production, both written and directed by Hill, centers around Stevie, a 13-year-old kid in ’90s Los Angeles, who befriends a group of skaters. It looks set to deliver some seriously nostalgic vibes, and the internet is here for it.

While many would be quick to assume that Hill would lean more towards the comedic side for his first-ever director’s assignment, that appears to be far from the case. Mid90s looks to be a coming-of-age story that explores the difficulties of adolescents, specifically that of a troubled home life and trying to fit in with a new clique. We’re loving it, and so it would seem, is everybody else.

Here are just a handful of the positive, nostalgia-loving responses on Twitter.

This #Mid90s trailer made me think about how kids back then couldn’t fathom the era becoming a nostalgic novelty. But that’s life’s cycle, and one day, this era’s kids will be in that same position, fondly talking about how things used to be back in 2018.pic.twitter.com/FJBb39WUpx

jonah hill wrote and directed mid90s so everyone on stan twitter could bag a curly-haired e-boy when we all go to see it in theaters. we love a wingman.

Not enough talk about the Mid90s trailer today. Loved it. pic.twitter.com/sbnzBJY3Vm

Mid90s looks like a straight up classic in the making pic.twitter.com/DvMqaQX4tU

Sunny Suljic stars as Stevie in the picture, alongside Jerrod Carmichael, Lucas Hedges, and Alexa Demie. You can look forward to Jonah Hill’s Mid90s landing in theaters October 19.

For more, listen below as ‘The Dropcast’ traces the history of Jonah Hill’s style influence.