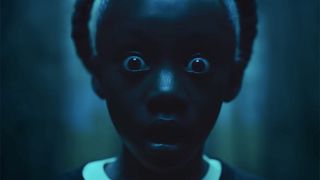 The first trailer for Jordan Peele‘s long-awaited Get Out follow-up, Us, has arrived, and it’s an absolute mind-melt. Watch above.

Dropping the two-and-a-half minute trailer on Christmas morning, Peele’s next feature-length adventure is far from a festive feast. Rather, the movie centers around a family who, upon returning to the mother’s childhood home in Northern California, find themselves threatened by four terrifying opponents: doppelgängers of themselves.

The trailer starts with off-beat finger snaps to the Luniz track “I Got 5 on It,” and moves through hallways full of rabbits, sealed mouths, and various other moments that have caused Twitter to erupt with fan-theories — take a look at some of the best ideas below.

observations from the #USMovie trailer

– Black dude bought a boat.
– Mom couldn’t snap on Rhythm to “I Got 5 On It”
– Family on vacation with no black friends

Movie sub line is “your biggest enemy is yourself”

Think about how to “fit in” the black family lost themselves

Not sure if the WW crossing his path has anything to do with his journey to the place that says "Find Yourself" but mark my words, this is about to be a journey of self "reflection" #UsMovie pic.twitter.com/jQQrx9qqVb

My family and I are already cooking up #Us theories. My dad and sister suggested the boy might be a link between the families. I corroborated this with the fact that the Dopple-boy has his mouth sealed (speak no evil?), and the real boy was the first to find one of Them. pic.twitter.com/OWLFdvuBb5

I’m about to reach real quick

The little boy had to ask “I Got 5 on It” meant, a hint that the father didn’t raise his kids around other Black people.

Other hints: Lupita telling her kids to “get in rhythm,” the way Winston Duke’s character talks #UsMovie

My #UsMovie theory: there’s a 5th family member who died that will be the most elusive/hardest to kill until the mother confronts the loss. Hence, I’ve got 5 On It.

We're gonna found out in Us that the family tryna kill the main characters are the actual heroes and the people we're watching are the villains.

Us stars Lupita Nyong’o and Winston Duke (Black Panther), and Elizabeth Moss (The Handmaid’s Tale), and will arrive in theaters March 15, 2019.

Do you have any theories about the movie? Share your thoughts in the comments.

In other news, Jake Gyllenhaal’s Mysterio is actually a “good guy” in ‘Spider-Man: Far From Home.’

Twitter Is Losing Its Mind Over Jordan Peele’s New Horror Movie ‘Us’
MoviessponsoredMarch 22, 2019

The Nightmarish New Trailers for ‘The Twilight Zone’ Reboot Are All Jordan Peele
MoviessponsoredMarch 26, 2019
What To Read Next
Load More
Search Results
Load More