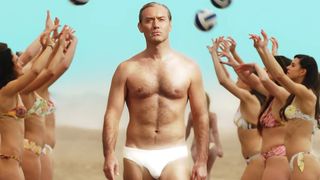 The New Pope is here. HBO released today the first trailer for the follow-up to 2016’s critically acclaimed papal series.

Jude Law is back, looking just as young but not so Pope-y while strolling on the beach in a blindingly white speedo. His saunter is contrasted with newcomer John Malkovich, aka the new Pope. We get nothing in the way of plot details or even dialogue, but the soundtrack of “All Along the Watchtower” lets us know the second season should be just as cheeky.

Watch the trailer above, and hang tight as we wait for a release date for The New Pope and the appearance of Marilyn Manson in the Pope universe.