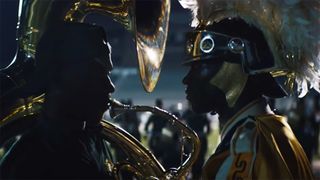 French electronic music duo Justice just dropped the visual for their single “Heavy Metal,” taken off their recently released album, Woman Worldwide. The duo has been nominated for the Best Dance/Electronic Album category for the 2019 Grammy Awards, and the new video also follows up on their visual for “Love SOS,” another song from the aforementioned project that premiered back in September.

The four-minute video directed by Filip Nilsson spotlights the Norfolk State University Spartan Legion marching band, from practice in the streets to the field, while also highlighting the choreographed movement and music, alongside the Justice version of the track.

Nilsson met the 220-person band in Norfolk Virginia over a year ago, and he explained in a press release that he knew right away he’d work with them eventually.

“I came across a clip of this marching band from Norfolk in Virgina over a year ago. I immediately knew that these guys had something special and that wanted to make a music video with them one day. Months passed and then suddenly the Heavy Metal track by Justice came my way,” he said in a statement.

Enjoy the video above, then after, haven a listen to Woman Worldwide via Spotify below.

In other music news, Kanye West calls out Drake demanding an apology.