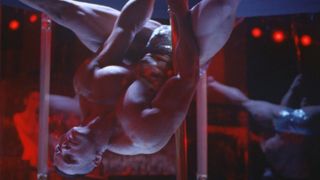 Fresh off the release of their latest album, Woman Worldwide, Justice has just dropped the music video for one of their standout singles from the new LP with “Love SOS.”

Directed by Edouard Salier, the visual depicts a male bodybuilder who is a pole dancer performing in a nightclub, when suddenly, the individual is filled with rage and begins to attack the audience for a truly cinematic experience.

According to Salier, Xavier and Gaspard of Justice wanted “Love SOS” to be “sexy, strange, and brutal.” “The song is sweaty and weeping; the visuals needed to illustrate this and to be as beautiful as they are disturbing,” he said. “I wanted the spectator of the video to find themself in the same voyeur position as the audience attending the show: first, to find ourselves fascinated by the performance of the pole dance, then surprised and hypnotized by its outcome.”

Enjoy the video above, then after, have a listen to Woman Worldwide below.

In other music news, 2 Chainz, Drake, and Quavo’s child doppelgangers star in “Bigger Than You” video.