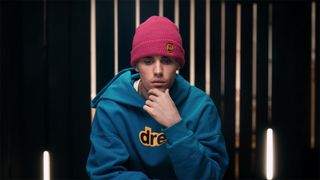 One week after announcing a new album, tour, and docuseries, Justin Bieber is back to preview his latest single, “Yummy,” while also providing us with a glimpse at his upcoming YouTube documentary series. The clip touches on Bieber’s most difficult challenges coming off of a musical hiatus, as the new album will serve as his first LP since 2015’s Purpose.

Justin Bieber: Seasons is a new YouTube docuseries offering fans an up-close look at the past few years of JB’s life, from the joys of marriage to the struggles that come with being one of the world’s most recognizable entertainers. The series is scheduled to premiere on YouTube January 27. You can gain early access to new episodes and watch the program ad-free with YouTube Premium.

Additionally, Bieber’s new single, “Yummy,” which is teased in the Seasons trailer, is slated to arrive January 3. You can pre-save it here.

Justin Bieber Asked Fans to Help Him Cheat “Yummy” to the Top of Billboard’s Hot 100
MusicsponsoredJanuary 12, 2020