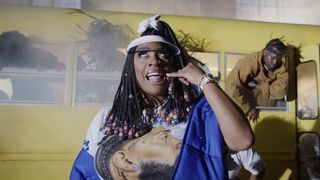 Kamaiyah has just dropped a video for her new track “Windows,” featuring Quavo and Tyga.

The visual is a tribute to black culture, opening with a black-and-white scene that pays homage to the Black Panthers. “Windows” continues in a slightly political vein, with Kamaiyah wearing a Nipsey Hussle shirt, but that’s not to say it’s completely serious. The video takes cues from ’90s Hype Williams videos, and features the three rappers partying in a warehouse, in front of futuristic cars, and at a street party. Watch it above.

“Windows” is the “first release off of Kamaiyah’s forthcoming project,” which, as yet, has no title or release date.