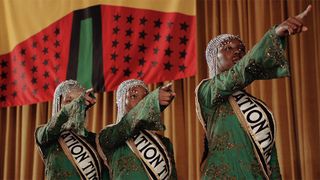 American jazz musician Kamasi Washington is back in support of his June 2018 release of Heaven and Earth, sharing the official music video for album cut, “Hub-Tones.” The aesthetic was directed by London-based director Jenn Nkiru, who recently worked with JAY-Z and Beyoncé on their stunning “APESHIT” visual, directing second unit for lead director Ricky Saiz.

“Hub-Tones is me trying to connect my ancestors via music,” says Washington. “As an African-American, a lot of us don’t know the country of our origin, that’s why most of us take on the ideology of Pan-Africanism. I was trying to connect to my ancestors by connecting African rhythms with a Freddie Hubbard tune which gave me that connection in a different way.”

After watching the Jenn Nkiru-directed “Hub-Tones” video, you can revisit Heaven and Earth underneath.

For more, be sure to read our recent interview with Kamasi Washington.