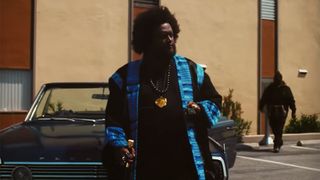 Kamasi Washington just dropped a brand new video for his song “Street Fighter Mas.” After releasing the single from his upcoming double album Heaven and Earth, which arrives Friday, June 22, the A.G. Rojas-directed visuals have arrived. Check it out above.

A tribute to the beloved arcade game, the “Street Fighter Mas” video is a surreal journey where Washington searches for a worthy opponent to face off. Washington is currently in the midst of an extensive worldwide tour. Find out where you can catch his stunning live performance right here.

In other music news, BROCKHAMPTON debuted a new song and announced the name of their upcoming album on ‘The Tonight Show’. Watch their performance here.

The Next Door Goes From City Streets to Wooded Trails to Showcase adidas Terrex Collection
SneakerssponsoredOctober 23, 2019

This Epic Video Breaks Down Everything Wrong With The ‘Game of Thrones’ Finale
MoviessponsoredSeptember 10, 2019

This Epic Skate Video Takes You on a Road Trip Across America
SkateboardingsponsoredJanuary 2, 2020
Follow
Highsnobiety Music
What To Read Next
Load More
Search Results
Load More