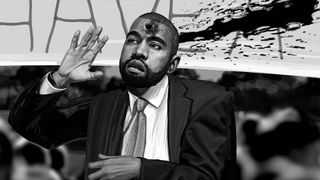 DJ Muggs and MF Doom have released the music video for “Assassination Day” from Muggs’ new Dia del Asesinato project. And while the song itself doesn’t appear to take shots at anyone in particular, the DJ Muggs-directed aesthetic is another story entirely.

Set in the year 2020, the clip begins as a mysterious individual receives a covert assignment, leading him to political rally. On the way to his destination, he sees signs being held, reading “SLAVERY WAS A CHOICE!” and “KEEP AMERICA GREAT 2020.”

Upon reaching his target location, the man pulls out a sniper rifle and eyes his prey, one would think to be Donald Trump at this point. We then find out, however, that it’s Kanye West who has been assassinated, as Trump and Vladimir Putin point to each other and laugh upon receiving news of the murder.

This is certainly one you’ll have to see for yourself. Press play above to check it out.

In other news, Kanye West and Kid Cudi are headlining Tyler, the Creator’s Camp Flog Gnaw 2018.