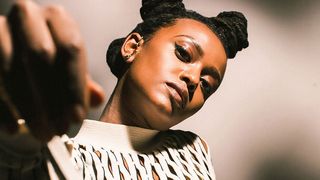 Last year, Kelela shook up the music world with her long-awaited debut album Take Me Apart. The lead single “LMK” was hailed as an anthem for assertive women who are in full control of their sex lives and aware of the fact that sometimes these types of encounters aren’t meant to be that deep. Today, Kelela unexpectedly shared a remix for the Jam City and kwes.-produced track titled “LMK (What’s Really Good)” that features Princess Nokia, Junglepussy, Cupcakke, and Ms. Boogie.

This upgraded version of the sultry song channels a new force of feminine energy as it evokes the power of sisterhood with all of the women MCs speaking their truth on the mic. They even found ways to reference culturally relevant things like Supreme, DMs, and Charlie Sheen. “LMK (What’s Really Good)” is fresh off Kelela’s forthcoming remix album TAKE ME A_PART, THE REMIXES which also includes KAYTRANADA, Serpentwithfeet, Gaika, Kareem Lotfy, Lsdxoxo, and more.

“This project has been evolving in my mind since I was deep in recording ‘Take Me Apart,'” Kelela said in a press release. “I obsessed over production choices on the album and my only solace was knowing that the songs would be reimagined in this way. So, it’s not just a bunch of remixes…it’s how my worldwide community of producers and DJs communicate through difference. It’s also about the camaraderie that we experience when we find the overlaps. The same songs get to exist in these alternate realities which means different people get to have a relationship with the music. maybe even with each other.”

While you stream the latest remix, revisit our profile on Kelela from Issue 16.

In other news, check out our ‘Under The Radar’ profile on Okay Kaya right here.