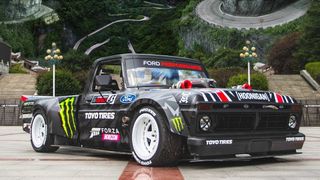 Following the completion of the automotive industry’s most celebrated viral video franchise, Gymkhana, Ken Block is back with the second episode of the new series spinoff, Climbkhana. Presented by Toyo Tires, Forza Motorsport, and Omaze, Climbkhana TWO finds the famed rally driver taking on one of the most dangerous roads in the world.

Block is seen whipping around a 914-horsepower Ford F-150 Hoonitruck, as he drifts up China’s Tianmen Mountain. Along the way, he must maneuver the vehicle through 99 deadly turns to reach the top of China’s most dangerous road.

Press play above to watch Block and Hoonigan Media’s latest visual treat, and be sure to remain on the lookout for more from the new Climbkhana series, again, which is a spinoff of the beloved Gymkhana franchise. Gymkhana wrapped in 2018 with Gymkhana TEN.

The Entire ‘Fortnite’ Map Just Got Sucked Into a Black Hole & Players Are Freaking out
DesignsponsoredOctober 14, 2019
Follow
Highsnobiety Design
What To Read Next
Load More
Search Results
Load More