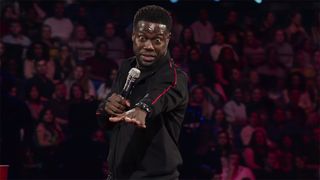 Even though he’s been raking in the big bucks thanks to a plethora of movie roles, Kevin Hart isn’t abandoning his standup roots. The funnyman has partnered with Netflix to bring a new comedy special to fans all across the globe.

Mark your calendars damn it!!!! Let's gooooooooo people!!!! ITS ABOUT TO GO DOWN!!! pic.twitter.com/M40HkbzHDO

Press play above for a glimpse of what to expect from Kevin Hart: Irresponsible, which comes to Netflix on April 2.

Kevin Smith Is Working on a New ‘He-Man’ Anime Series for Netflix
MoviessponsoredAugust 19, 2019