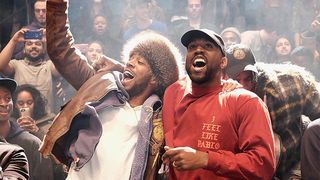 After breaking down all the samples used in notable releases like Kanye West’s ye, Pusha-T’s DAYTONA, and A$AP Rocky’s TESTING, the fine folks at Bandstand have offered up their musical findings in their latest video about Kanye West and Kid Cudi’s Kids See Ghosts album, which you can watch above.

Standout samples include a vocal from legendary New Orleans jazz singer Louis Prima on “4th Dimension” and a haunting guitar riff from the late Kurt Cobain on closing track “Cudi Montage”. Kanye West dug deep, also sampling Marcus Garvey’s “Knowledge of Self” on “Freeee (Ghost Town Pt. 2)” as well as Napoleon XIV’s “They’re Coming To Take Me Away” on “Fire”.

Listen to Kids See Ghosts in its entirety below.

In other music news, ‘Rick and Morty’ recorded a hilarious song for Kanye West’s 41st birthday. Listen to it here.