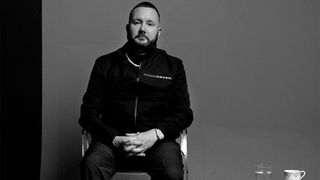 Kim Jones has been exhaustingly busy these days it seems. In addition to taking part in RIMOWA’s new global campaign, as well as curating A Magazine Curated By’s latest issue alongside Dior, the English fashion designer recently got together with SHOWstudio to take part in their “In Fashion” series. During the interview Jones discussed working at Dior, being the “king of collaborations,” his relationship with the late Alexander McQueen, and much more.

Now on SHOWstudio! @Dior Menswear Artistic Director @mrkimjones spoke candidly to SHOWstudio’s Fashion Editor @georginakevans in an exclusive In Fashion interview! Coinciding with the launch of his @amagazinecuratedby issue, the interview sees Jones and Evans traverse all aspects of his life, from his mammoth record collection and his time at Central Saint Martins with Louise Wilson, to his special friendship with the late Lee Alexander McQueen and his interpretation of luxury houses @LouisVuitton and @Dior! The interview exists as an unedited hour-long segment for a limited time only, soon to be condensed into a shorter segment. Link in bio, indulge in the long-form while you can!

Now the Artistic Director for Dior Men’s, the nearly hour-long conversation finds Jones delving into his creative process when designing a new collection. He touches on his attempt to reinvent Dior’s oblique pattern on modern silhouettes, while also speaking on inspirations for his line. The 39-year-old designer then dives into his affinity for Japanese culture, his celebrated record collection, and frequent collaborators.

Press play above to gain more insight into the man behind Dior Men’s.