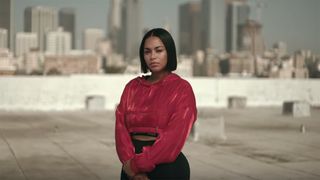 PUMA has tapped Lauren London to star in its new campaign, “Forever Stronger.” The project is led by a heartfelt video paying tribute to London’s late boyfriend, Nipsey Hussle, who was shot and killed outside of his Marathon Clothing store in Los Angeles on March 31.

Created by London and directed by Danny Williams, the “Forever Stronger” campaign video takes viewers on a tour of Nipsey’s LA stomping grounds of Crenshaw and Slauson. The clip is backed by a touching poem written by Samantha Smith and read by London.

“This piece was a creative vision Lauren wanted to bring to life to signify the continuation of her marathon alongside PUMA. Forever Stronger,” the YouTube description reads. Press play above to watch the emotional Nipsey Hussle tribute video, and remain on the lookout for more from Lauren London and PUMA.

To the Most High. I Give Thee.

PUMA Is Reissuing Its Collab With Nipsey Hussle’s The Marathon Clothing
StylesponsoredJanuary 24, 2020