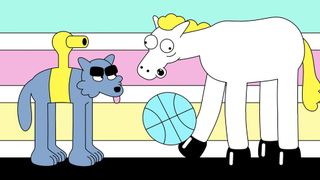 As Vince Staples continues to venture outside of music, the Long Beach rapper has been tapped to voice the lead character in Adult Swim‘s new cartoon, Lazor Wulf. Fellow musician DRAM also features in the show, in addition to comedian Quinta Brunson, WWE wrestler Big E and more.

Yes please watch. We worked hard. I play an adorable child with puffs on her head and an attitude problem https://t.co/lSRRP8zk6R

Like the name implies, Lazor Wulf centers around just that, a wolf with a laser on his back. Per Adult Swim, the cartoon “is about finding the inner strength to buy your own cereal, not dying, and the art of the scam.”

Henry Bonsu created the show, which is executive produced by Bonsu, Vince Staples, Daniel Weidenfeld, and Carl Jones, co-creator of The Boondocks. Furthermore, Bento Box Entertainment is in charge of the animation.

Press play above for a taste of what to expect from Lazor Wulf, which premieres on Adult Swim Sunday, April 7.