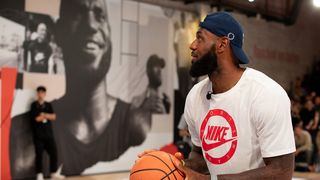 It’s a story that begins in smalltown Ohio and ends with one of the best-known athletes in the world and arguably the greatest basketball player of all time. Coming from a single-parent household in Akron, LeBron James’ life was anchored by sport. It carried him to success and that’s a story with parallels wherever he travels.

Last September, LeBron headed to Berlin with Highsnobiety as part of his “More Than an Athlete” world tour, meeting the young players rising up in the city’s basketball scene. He was accompanied by some of the biggest names in German sport, including Bayern Munich footballer Jerome Boateng and 21-year-old boxer Zeina Nassar, a Muslim who made history in Germany in 2013 as the first woman to compete in a headscarf, going on to win the German featherweight championship in 2018.

Despite being the capital of Europe’s wealthiest nation, Berlin isn’t immune to the inner-city pressures young people experience growing up around the world. The city’s evolution following the reunification of East and West Berlin in 1989 has seen it develop into a landscape full of art, culture, and grit, but also poverty and hardship.

In such an environment, sport becomes a vital foundation for young people growing up and defining themselves, and basketball’s rapid rise in popularity around the world has seen the sport serve the same role in cities in Europe and elsewhere as it has for kids growing up in US urban centers.

But participation in sport declines among Berlin’s youth as they get older. The number of kids participating in sports clubs drops 20 percent between the ages of 14 and 19, and by the age of 19, only one in four boys still regularly participates in sports. For girls, it drops to one in 10. LeBron’s visit was driven by a desire to inspire Berlin’s young to rediscover the power of sport as a way to empower and connect individuals and communities.

Beyond the court, LeBron is equally respected for what he represents socially, culturally, and politically. His I Promise school, which opened in Akron in July 2018, encapsulates the player’s desire to give back to his hometown and offer opportunities he didn’t have growing up. Likewise, his political stances on a wide range of issues have had an impact on young people, even those growing up thousands of miles away.

But at the core of the LeBron James phenomenon is the simple belief that sport is something where people of all backgrounds can come together and be united by a single objective. And it’s hard to think of a place where that message would resonate more than a city that was split in two for 28 years by a concrete barrier representing the 20th century’s starkest ideological divide.

To reflect this spirit of bringing people together, LeBron closed out his visit by hosting Berlin’s largest ever pick-up game, where anyone could step onto the court and play. To tie things back to Berlin’s homegrown sporting community, LeBron pledged to convert every point scored into a cash donation to a local sporting organization (the identity of which is yet to be announced), bringing the joy of the game to even more kids around the city.

As his world tour continued, there’s no doubt LeBron’s message resonated just as powerfully with every group he met. His career is one defined by more than just athletic prowess. It’s about leadership, empowerment, and solidarity. More than an athlete, he’s an ambassador for his team, his community, and anyone who has had to fight to get what they want in life.

LeBron James & Nike Want You to Draw all Over Your AF1
SneakerssponsoredSeptember 24, 2019

A Conversation With LeBron James Convinced Nike to Run the Kaepernick Ad
SportssponsoredMarch 10, 2019