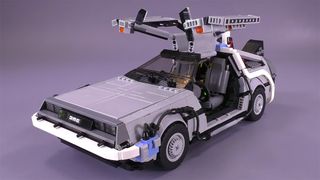 A quick glance at Dave Slater’s Flickr page and not only can you tell that he’s obviously into LEGO, but you also see that he’s a master when it comes to custom builds. For his latest creation he has taken on Doc Brown’s beloved DeLorean from the Back to the Future franchise.

“The way I see it, if you’re gonna build a time machine into a car, why not do it with some style?,” Slater says.

Slater’s meticulously-crafted Delorean is built from approximately 2,010 pieces. For more on the eye-catching replica, follow here.

This 960-Piece LEGO Build Is the Coolest Fiat You Could Ever Own
DesignsponsoredMarch 4, 2020

Build Your Own Batmobile With LEGO’s Version of the Tim Burton Classic
DesignsponsoredNovember 7, 2019