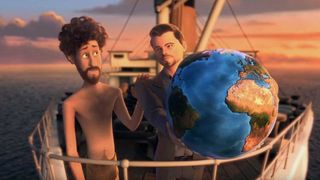 Lil Dicky takes on climate change with his star-studded new “Earth” video, which he’s been teasing all week. Now, all seven-plus minutes of the clip are here, as we are bombarded with an impressive cast of collaborators, ranging from Leonardo DiCaprio and Kevin Hart, to Justin Bieber, Ariana Grande, Wiz Khalifa, and countless others.

“Like a lot of people, I had a vague idea that something bad was happening here on Earth, but I didn’t really realize how insane our climate crisis is and how screwed humanity is about to be,” Lil Dicky said in a statement. “It’s full-on crazy! If we don’t get our act together now, and change a lot about our fundamental behavior, Earth will become unlivable alarmingly soon. Why did it take me so long to get wind of this? I feel like everybody on the planet should be talking about this 24/7. But that’s not the case. So I wanted to make the most entertaining and epic piece of content possible, to get everyone aware and talking. Because it’s now or never… Let’s save the Earth! We love the Earth!!!!”

A portion of the proceeds from the song, video, and merchandise will be given to various nonprofits as chosen by The Leonardo DiCaprio Foundation. These charities are helping communities adopt 100 percent renewable energy, as well as protect critical ecosystems and wildlife.

Thank you to @lildickytweets and all the artists that came together to make this happen. Net profits from the song, video, and merchandise will go to many @dicapriofdn partners on the frontlines of implementing solutions to climate change. #WeLoveTheEarth https://t.co/3u8cyA6NPq pic.twitter.com/cpMeTB4Ziq

Below you will find a rundown of the cast and characters from Lil Dicky’s animated “Earth” video. After watching the aesthetic, visit We Love the Earth for behind-the-scenes content, merchandise, and more information on climate change.