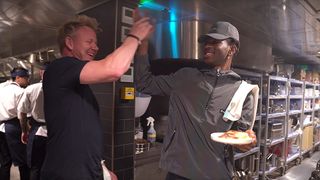 Lil Nas X continues to promote his debut EP 7, most recently teaming up with irascible British chef Gordon Ramsay in the kitchen. Watch above as Ramsay teaches the 20-year-old rapper the art of making a panini.

Lil Nas X, of course, has a Kurt Cobain-indebted track titled “Panini.” After a Twitter exchange, the chef and rapper linked up at Ramsay’s Lucky Cat restaurant in London to make a sandwich using Asian ingredients. Paninis and Ramsay have a history beyond mere preparation, with the chef famously having once called a television contestant a “panini-head.”

Sadly, the Lil Nas X track has little to do with toasted sandwiches. It actually refers to a character in the cartoon Chowder. In a recent tweet, the rapper revealed that the song interpolates parts of Nirvana’s single “In Bloom.” You can listen to Lil Nas X’s “Panini” chat with Zane Lowe on Beats 1 here.