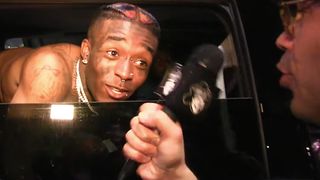 Lil Uzi Vert has run away from his second interview with Nardwuar. The truncated exchange took place at this year’s Rolling Loud Festival in Miami. And much like their 2018 interview in Vancouver, it ended with Uzi doing a “doot doo” from the security of his car.

The Canadian “Human Serviette” kicked the interview off with his usual offering of ultra-specific gifts. Mere minutes into their chat, however, and at the mention of Guns Garcia, Uzi replied, “He know too much. I can’t do this,” and made a run for it.

Nardwuar’s subsequent interaction with Uzi’s security guard almost makes up for the brevity of the interview itself. Thankfully, the skittish rapper was obliging enough to finish Narwuar’s catchphrase. Watch the clip above.