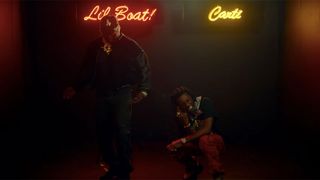 Lil Yachty has enlisted Playboi Carti for a video of his track “Get Dripped.” Among other memorable tableaus, the visual finds Carti catching butterflies while Yachty alternately stunts in all-camo and day-glo raver looks. Hijinks ensue. Watch it all go down above.

In other news, Jaden Smith releases an unsurprisingly bonkers visual for his track “Plastic.” Watch it here.

Digging Deeper
How the Rise of the YouTube Visualizer Is Changing Hip-Hop
MusicsponsoredJune 4, 2019
Follow
Highsnobiety Music
What To Read Next
Load More
Search Results
Load More