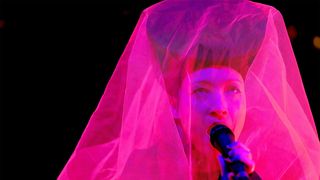 After officially signing to Ninja Tune, Little Dragon announced the release of their forthcoming EP titled Lover Chanting. Following the unveiling of the title track, the Swedish group has shared a Jack Whiteley and Joe Wills-directed visual for “Lover Chanting” that incorporates gamings, disco, and cosplay within the grounds of Allington Castle in England.

“Just an ordinary day in Bodin’s castle! Big hugs to director team Jack and Joe and of course all the party people,” Little Dragon said in a press statement. “It was the most splendid day that Kent had seen in years. Sun shining over the rose garden with avatars lined up ready to lose their minds. Come full moon the disco was on. No turning back this time. Unless you level up!”

The Lover Chanting EP is stacked with three tracks and was recorded at Gothenburg Studio. Pegged as the band’s deepest dive into dance music, the project is expected to drop on November 9 followed by a special 12-inch black vinyl release. For now, utilize the streams and watch the visual for “Lover Chanting” unfold above. While you’re here, scroll down for the full list of Little Dragon’s upcoming tour dates as well.