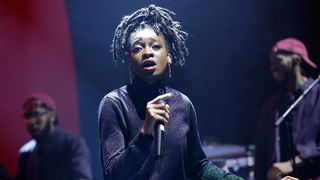 It’s been nearly two years since the release of Little Simz‘s Stillness in Wonderland, and this week the English rapper/singer returns with new material in the form of “Offence.” The track was premiered today as Zane Lowe’s World Record.

feeling very blessed. Only the beginning, hope you like it, enjoyyyy OFFENCE OUT NOW ◽️◽️◽️

“Super excited to share my brand-new music with the world, it’s been a minute,” says Simz. “‘Offence’ for me feels like the right way to kick start it, can’t wait to share more.”

The official artwork for “Offence” is a photograph that Simz took herself, while her handwriting is then featured in the lyric video above.

Be on the lookout for more new material from Little Simz.

In other music news, Noname announces ‘Room 25’ tour for her debut album.