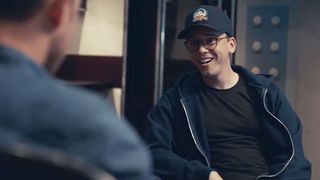 Logic and Eminem have shared the official video for their joint single, “Homicide.” The track samples comedian Chris D’Elia’s spot-on impression of Eminem who stars in the visual production which involves body doubles, screens, and surveillance.

“Homicide” appears on Logic’s Confessions of a Dangerous Mind album that came out last month. The collaboration marked the first time the rappers have worked together and sees them taking turns throughout to spit lightning-fast bars.

“You about to get out-rhymed, how could I be dethroned?/ I stay on my toes like the repo, a behemoth in sheep clothes/ From the East Coast to the West, I’m the ethos and I’m the G.O.A.T,” Eminem raps over the Shroom- and Bregma-produced beat.

It’s been quite a busy year for Logic. Back in March, the 29-year-old rapper announced the arrival of a new album, Confessions of a Dangerous Mind, which is still “coming soon.”

During that same month, he dropped two new Mac DeMarco-produced tracks called “I’m Probably Gonna Rock Your World” and “Vacation From Myself.” The songs were from a project titled Supermarket, the same name as his debut novel that went on to become a New York Times number one bestseller, making him the first rapper in history to do so.

While you’re here, revisit our review of ‘Confessions of a Dangerous Mind.’