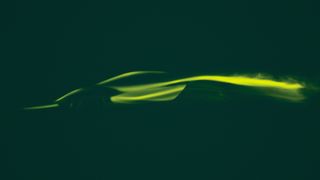 The 2019 Shanghai Motor Show is well underway and luxury British car manufacturer Lotus has announced an all-new vehicle with “Type 130,” the brand’s first new production car in 11 years. The model is being billed as the first all-electric British hypercar, and was teased by Lotus with a vague sketch depicting the silhouette’s sleek and curvaceous profile.

“Type 130 will be the most dynamically accomplished Lotus in our history,” said CEO Phil Popham in the official announcement. “It marks a turning point for our brand and is a showcase of what we are capable of and what is to come from Lotus.”

Lotus said that the Type 130 hypercar will be unveiled in London later this year and offered no details or specifications, aside from the brief teaser. In terms of the distinctive name, Type 130 is a nod to several important models released by Lotus over the decades, kicking off with the Type 14 (Elite) from 1957 that was regarded as the world’s first composite monocoque production road car.

According to reports last year, the Type 130 is suggested to retail for over $2.5 million, boast at least 1,000 horsepower, an all-wheel-drive system and top speed of over 200 mph.

Volkswagen’s Type 20 Electric Camper Concept Is a Blast From the Past
DesignsponsoredJuly 5, 2019