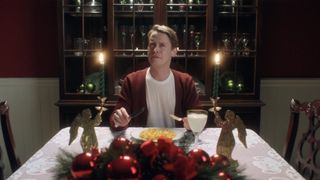 The Home Alone star reenacts a few of his famous scenes from the iconic 1990 Christmas comedy film with a twist, now portrayed as a grown up Kevin McCallister.

#heygoogle Have you ever wondered what Kevin McCallister is like as an adult?  Me neither. But just in case you’re curious you should totally watch this #ad pic.twitter.com/uO9qMPrUT3

Emphasizing how technology has evolved since the ’90s, particularly promoting Google Home and Google Assistant, Macaulay Culkin is seen asking the voice assistant with a variety commands and reminders such as to get him aftershave, clean his bed sheets after jumping on them, scare away a delivery guy with the movie’s classic fictional film Angels With Filthy Souls, and even executing “Operation Kevin,” which showcases a cutout of NBA superstar Kevin Durant riding atop a robot vacuum to scare away burglars — another key sequence inspired from the holiday classic.

Enjoy the ad above, and for more, take a closer look at the outtakes, bloopers, and behind-the-scenes footage below, in which Macaulay Culkin describes what it was like returning to the role after all these years.

Work From Home
Make the Most of Working Alone & Indulge in These Face Masks
LifesponsoredSeptember 20, 2019

Work From Home
These Insane Houses Are Where Your Favorite Celebs Are Self-Isolating
LifestylesponsoredMarch 19, 2020

The Tech to Help Bring the Halloween Haunt to Your Home
SelectssponsoredOctober 17, 2019
Follow
Highsnobiety Design
What To Read Next
Load More
Search Results
Load More